Death at the Opera - Language Course Italian Level A2 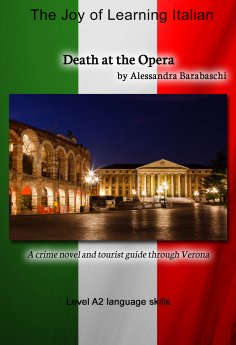 The story in short: Verona is the city of the most celebrated lovers in the history of literature: Romeo and Juliet.
But Verona is also the city of the Arena, the world known opera stage. It is here that the famous opera singer Eva Tanzi will make her long-awaited comeback, in the role of Aida.
Annika will also take part in the event… but she won't be only singing.
The book also contains several entertaining exercises, which will help you learn faster: "Read & Learn", Focus on Grammar, Solutions, Dossiers 1 + 2