The Gondolier of Death - Language Course Italian Level A2 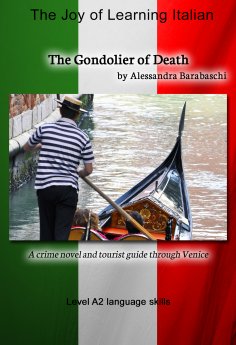 Annika and her boyfriend Andrea spend a couple of days in Venice, one of the most romantic cities in the world. They attend a ball during the famous Venetian carnival.
The evening among famous and influential guests carries on like a fairy tale for the young British girl. But a sudden death spoils the mood. What has happened and why? Annika will try to solve the mystery.
The book also contains several entertaining exercises, which will help you learn faster: "Read & Learn", Focus on Grammar, Solutions, Dossiers 1 + 2
More crime novels and tourist guides through italy by Alessandra Barabaschi: "The War of the Roman Cats" (Level A1), "The Theft of Aida" (B1), "The Lost Stradivari" (B2)

Alessandra Barabaschi is an art historian, an author, and an enthusiastic cosmopolitan. Since the day she was born in Parma (Italy), she is travelling around the world to get in touch with people, countries, and culture different from her own. She speaks several languages and, other than in Italy, she has lived, for example, in England, Iran, and Nigeria. Since 2007 her new base is Bonn, where she has founded her own PR agency in 2009. At the end of 2010 her first book has been published: A work in four volumes in English dedicated to the magnificent violins of Antonio Stradivari.