The War of the Roman Cats - Language Course Italian Level A1 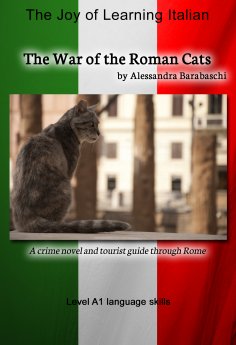 The story in short: Annika, a young girl, is living in Rome in order to learn Italian. She shares a flat with her friend Francesca in Largo Argentina. This square is famous for the stabbing of the Roman Emperor Julius Caesar and also because of the many cats living there today. An old woman takes care of those little felines. One day Annika notices that the old lady is wearing an expensive ring. A few days later the body of the woman is recovered from the Tiber river. Annika does not believe it was an accident and begins to investigate.