The Poison of the Medici - Language Course Italian Level A1 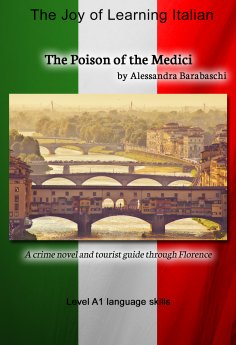 The story in short: On Christmas Eve Annika receives a phone call from her friend Corinna, who works as tourist guide at the Uffizi Gallery in Florence. Corinna is in trouble and Annika decides to travel to Florence, to help her out. The famous Florentine museum is getting ready for a sensational exhibition on the powerful Medici family. The artworks exhibited in the museum are marvellous, but a real drama is in store for Annika in the capital of the Renaissance.
The book also contains several entertaining exercises, which will help you learn faster: "Read & Learn", Focus on Grammar, Solutions, Dossiers 1 + 2