Love Is The Reason For Living 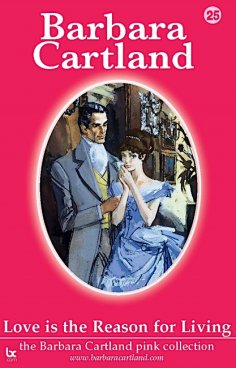 Lady Novella Crownley has been teaching at a girl's school far from her ancestral home, Crownley Hall, and one day her mother asks her to return. She leaves at once only to find that so much has changed since her last visit home. Her beloved father, the Earl of Crownley, had died some years earlier, leaving her mother lonely and unable to cope on her own. Unknown to Novella her mother had remarried and the first time she met her new stepfather, Lord Buckton, she did like him at all. In her absence Lord Buckton had been selling off everything at the Hall he could lay his hands on to pay for his debts and lavish lifestyle, and even had plans to sell the house and the estate as well. To her horror Novella found that he had sold her favourite horse, Salamander, to a near neighbour, Sir Edward Moreton. She was deeply suspicious of the charming and handsome Sir Edward, but her heart softened when he invited her to ride Salamander again. Her mother became seriously ill and Novella was forced to clash with her stepfather over the cost of medical care for her. Her relationship with her stepfather became worse while her feelings for Sir Edward began to intensify. She came to realise that she was in great danger from her stepfather who was determined to take everything from her and her mother at any cost. How Novella was able to defeat the forces ranged against her with the help of Sir Edward and find her own true love is told in this exciting and dramatic romance by BARBARA CARTLAND.