The Palliser Novels: Complete Parliamentary Chronicles (All Six Novels in One Volume) 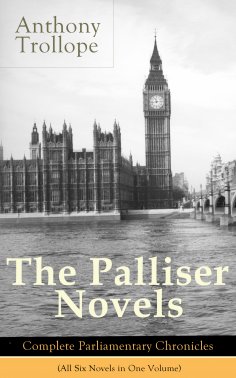 This carefully crafted ebook: "The Palliser Novels: Complete Parliamentary Chronicles (All Six Novels in One Volume)" is formatted for your eReader with a functional and detailed table of contents.
The Palliser novels are six novels, also known as the "Parliamentary Novels", by Anthony Trollope. The common thread is the wealthy aristocrat and politician Plantagenet Palliser and (in all but the last book) his wife Lady Glencora. The plots involve British and Irish politics in varying degrees, specifically in and around Parliament. Plantagenet Palliser is a main character in the Palliser novels. First introduced as a minor character in The Small House at Allington, one of the Barsetshire novels, Palliser is the heir presumptive to the dukedom of Omnium. Palliser is a quiet, hardworking, conscientious man whose chief ambition in life is to become Chancellor of the Exchequer. After an unwise flirtation with the married Lady Dumbello (daughter of Dr. Grantly and granddaughter of the Reverend Mr Harding from The Warden and Barchester Towers), he agrees to an arranged marriage with the great heiress of the day, the free-spirited, spontaneous Lady Glencora M'Cluskie.
Table of Contents:
Can You Forgive Her?
Phineas Finn
The Eustace Diamonds
Phineas Redux
The Prime Minister
The Duke's Children
Anthony Trollope (1815-1882) was one of the most successful, prolific and respected English novelists of the Victorian era. Some of his best-loved works, collectively known as the Chronicles of Barsetshire, revolve around the imaginary county of Barsetshire. He also wrote perceptive novels on political, social, and gender issues, and on other topical matters. Trollope's literary reputation dipped somewhat during the last years of his life, but he regained the esteem of critics by the mid-twentieth century.