WHAT IS ART? & WHEREIN IS TRUTH IN ART? (Meditations on Aesthetics & Literature) 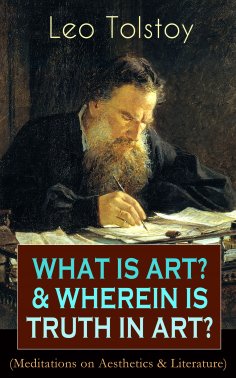 This carefully crafted ebook: "WHAT IS ART? & WHEREIN IS TRUTH IN ART? (Meditations on Aesthetics & Literature)" is formatted for your eReader with a functional and detailed table of contents.
Table of Contents
Introduction: Leo Tolstoy - Biography
What is Art?
Wherein Is Truth In Art?
On the Significance of Science and Art
Shakespeare and the Drama
The Works of Guy De Maupassant
A. Stockham'sTokology
Amiel's Diary
S. T. Seménov's Peasant Stories
Stop and Think!
Criticisms on Tolstoy:
"Tolstoy and Dostoyevsky" by Maurice Baring
My Literary Passions: "Tolstoy" by William Dean Howells
Essays on Russian Novelists: "Tolstoi" by William Lyon Phelps
"Tolstoy the Artist" and "Tolstoy the Preacher" by Ivan Panin
"Tolstoy and the Cult of Simplicity" by G. K. Chesterton
The Critical Game: "Tolstoy" by John Macy
"Count Tolstoi and the Public Censor" by Isabel Hapgood
Count Lev Nikolayevich Tolstoy or Leo Tolstoy (1828-1910) was a Russian writer who is regarded as one of the greatest authors of all time. Born to an aristocratic Russian family in 1828, he is best known for the novels War and Peace (1869) and Anna Karenina (1877) which are often cited as pinnacles of realist fiction. He also wrote plays and numerous philosophical essays.