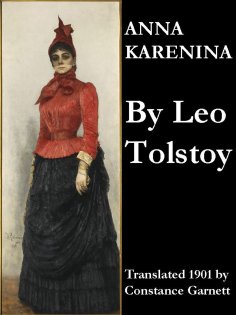 This carefully crafted ebook: "Anna Karenina - The Unabridged Garnett Translation" is formatted for your eReader with a functional and detailed table of contents. Widely considered a pinnacle in realist fiction, Tolstoy considered Anna Karenina his first real novel and Dostoevsky declared it to be "flawless as a work of art". His opinion was shared by Vladimir Nabokov, who especially admired "the flawless magic of Tolstoy's style", and by William Faulkner, who described the novel as "the best ever written". The novel is currently enjoying enormous popularity, as demonstrated by a recent poll of 125 contemporary authors by J. Peder Zane, published in 2007 in The Top Ten, which declared that Anna Karenina is the "greatest novel ever written". A bachelor, Vronsky is willing to marry her if she would agree to leave her husband Karenin, a government official, but she is vulnerable to the pressures of Russian social norms, her own insecurities and Karenin's indecision. Although Vronsky eventually takes Anna to Europe where they can be together, they have trouble making friends. Back in Russia, she is shunned, becoming further isolated and anxious, while Vronsky pursues his social life. Despite Vronsky's reassurances she grows increasingly possessive and paranoid about his imagined infidelity. About the Garnett translation: Constance Garnett's translation of Anna Karenina is still among the best. Some scholars feel that her language is closer to the 19th-century sense of the original. Garnett translated seventy volumes of Russian prose for publication, including all of Dostoyevsky's novels. A friend of Garnett's, D. H. Lawrence, was in awe of her matter-of-fact endurance, recalling her "sitting out in the garden turning out reams of her marvelous translations from the Russian. She would finish a page, and throw it off on a pile on the floor without looking up, and start a new page. That pile would be this high--really, almost up to her knees, and all magical."