Macbeth (The Unabridged Play) + The Classic Biography: The Life of William Shakespeare 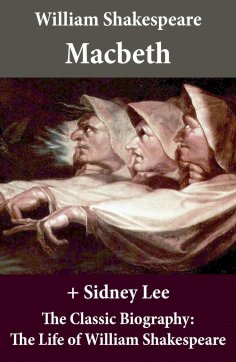 This carefully crafted ebook: "Macbeth (The Unabridged Play) + The Classic Biography: The Life of William Shakespeare" is formatted for your eReader with a functional and detailed table of contents. Macbeth is a play by William Shakespeare probably written between 1603 and 1607 and first published in 1623. The work tells the story of a brave Scottish general named Macbeth who receives a prophecy from a trio of witches that one day he will become King of Scotland. Consumed by ambition and spurred to action by his wife, Macbeth murders King Duncan and takes the throne for himself. He is then wracked with guilt and paranoia, and he soon becomes a tyrannical ruler as he is forced to commit more and more murders to protect himself from enmity and suspicion. The bloodbath and consequent civil war swiftly take Macbeth and Lady Macbeth into the realms of arrogance, madness, and death. Life of William Shakespeare is a biography of William Shakespeare by the eminent critic Sidney Lee. This book was one of the first major biographies of the Bard of Avon. It was published in 1898, based on the article contributed to the Dictionary of National Biography. William Shakespeare (1564 – 1616) was an English poet and playwright, widely regarded as the greatest writer in the English language and the world's pre-eminent dramatist. He is often called England's national poet and the "Bard of Avon". His extant works, including some collaborations, consist of about 38 plays, 154 sonnets, two long narrative poems, and a few other verses, the authorship of some of which is uncertain. Sir Sidney Lee (1859 – 1926) was an English biographer and critic. He was a lifelong scholar and enthusiast of Shakespeare. His article on Shakespeare in the fifty-first volume of the Dictionary of National Biography formed the basis of his Life of William Shakespeare. This full-length life is often credited as the first modern biography of the poet.