Much Ado About Nothing (The Unabridged Play) + The Classic Biography 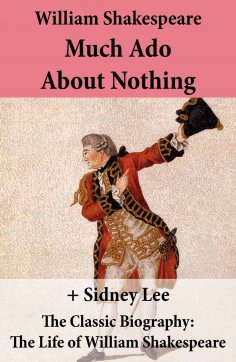 This carefully crafted ebook: "Much Ado About Nothing (The Unabridged Play) + The Classic Biography: The Life of William Shakespeare" is formatted for your eReader with a functional and detailed table of contents. Written around the middle of his career (1598 and 1599), Much Ado About Nothing is one of Shakespeare's great festive comedies. The men are back from the war, and everyone is ready for romance. The dashing young Claudio falls for Hero, the daughter of Leonato, governor of Messina, and his friend Don Pedro helps him secure her affection. These youthful lovers are contrasted with the more experienced Benedick and Beatrice, who have to be tricked into falling in love. Don Pedro's bastard brother, Don John, provides the intrigue, and the dimwitted constable Dogberry provides the laughs. Life of William Shakespeare is a biography of William Shakespeare by the eminent critic Sidney Lee. This book was one of the first major biographies of the Bard of Avon. It was published in 1898, based on the article contributed to the Dictionary of National Biography. William Shakespeare (1564 – 1616) was an English poet and playwright, widely regarded as the greatest writer in the English language and the world's pre-eminent dramatist. He is often called England's national poet and the "Bard of Avon". His extant works, including some collaborations, consist of about 38 plays, 154 sonnets, two long narrative poems, and a few other verses, the authorship of some of which is uncertain. Sir Sidney Lee (1859 – 1926) was an English biographer and critic. He was a lifelong scholar and enthusiast of Shakespeare. His article on Shakespeare in the fifty-first volume of the Dictionary of National Biography formed the basis of his Life of William Shakespeare. This full-length life is often credited as the first modern biography of the poet.