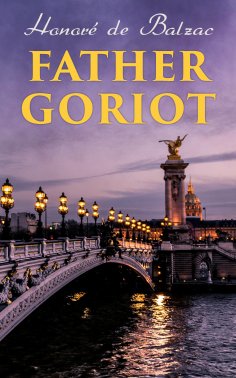 Father Goriot takes place during the Bourbon Restoration, which brought profound changes to French society; the struggle by individuals to secure a higher social status. Set in Paris in 1819, it follows the intertwined lives of three tenants of the Maison Vauquer boarding house: the elderly doting Goriot; a mysterious criminal-in-hiding named Vautrin; and a naive law student named Eugène de Rastignac. Goriot is an elderly retired vermicelli-maker who has bankrupted himself to support his two well-married daughters. Vautrin wants to get his hands on the fortune of an unmarried woman, trying to implicate Rastignac in the murdering of her brother.
Rastignac, who moved to Paris from the south of France, becomes attracted to the upper class and he is willing to use any means to better his situation.

Honoré de Balzac (1799-1850) was a French novelist and playwright. The novel sequence La Comédie humaine, which presents a panorama of post-Napoleonic French life, is generally viewed as his magnum opus. Owing to his keen observation of detail and unfiltered representation of society, Balzac is regarded as one of the founders of realism in European literature.