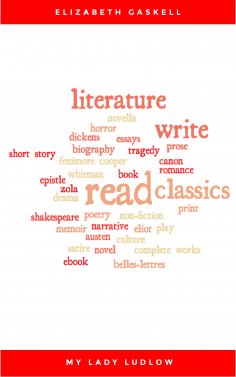 My Lady Ludlow is a long novella (over 77,000 words). It appeared in the magazine Household Words in 1858, and was republished in Round the Sofa in 1859, with framing passages added at the start and end.

It recounts the daily lives of the widowed Lady Ludlow of Hanbury and the spinster Miss Galindo, and their caring for other single women and girls. It is also concerned with Lady Ludlow's man of business, Mr Horner, and a poacher's son named Harry Gregson whose education he provides for. With Cranford, The Last Generation in England and Mr. Harrison's Confessions, it was adapted for TV in 2007 as Cranford.