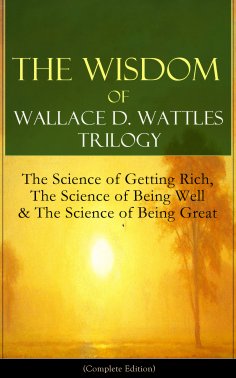 This carefully crafted ebook: "The Wisdom of Wallace D. Wattles Trilogy: The Science of Getting Rich, The Science of Being Well & The Science of Being Great (Complete Edition)" is formatted for your eReader with a functional and detailed table of contents. "The Science of Getting Rich" was published in 1910 by the Elizabeth Towne Company. The book is still in print. It was a major inspiration for Rhonda Byrne's bestselling book and film The Secret (2006). In The Science of Getting Rich Wattles explains how can a person overcome mental barriers, and how creation, not competition, is the hidden key to wealth attraction "The Science of Being Well" is not a philosophical treatise, but a practical guide and handbook for those whose main goal is health. "The Science of Being Great" is a personal self-help book of the author. He is introducing us to a principle of power and showing us the immense effect of the power of positive thinking. Wallace Delois Wattles (1860–1911) was an American author. As a New Thought writer, he remains personally somewhat obscure, but his writing has been widely quoted and remains in print in the New Thought and self-help movements. Wattles often travelled to Chicago, where he gave "Sunday night lectures" among several leading New Thought authors. He studied the writings of Georg Wilhelm Friedrich Hegel and Ralph Waldo Emerson and recommended the study of their books to his readers who wished to understand what he characterized as "the monistic theory of the cosmos.".