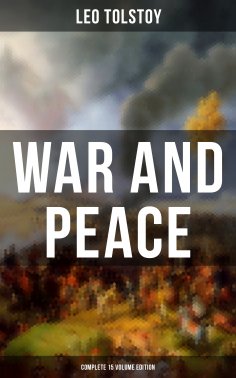 War and Peace is regarded as one of the central works of world literature and was first published in its entirety in 1869. The novel charts the history of the French invasion of Russia, and the impact of the Napoleonic era on Tsarist society, through the stories of five Russian aristocratic families. Time magazine ranked War and Peace third in its poll of the 10 greatest books of all time. This complete English version translated by Louise and Aylmer Maude was originally published in 1922. The Maudes are classical translators of Leo Tolstoy who worked directly with the author and gained his personal endorsement. This edition includes all 15 books + the first and second epilogue along with reminiscences. Count Lev Nikolayevich Tolstoy or Leo Tolstoy (1828-1910) was a Russian writer who is regarded as one of the greatest authors of all time. Born to an aristocratic Russian family in 1828, he is best known for the novels War and Peace (1869) and Anna Karenina (1877) which are often cited as pinnacles of realist fiction. He also wrote plays and numerous philosophical essays. Table of Contents: Introduction Leo Tolstoy: A Short Biography "Tolstoy the Artist" and "Tolstoy the Preacher" by Ivan Panin "Count Tolstoi and the Public Censor" by Isabel Hapgood War and Peace Book One: 1805 Book Two: 1805 Book Three: 1805 Book Four: 1806 Book Five: 1806 - 07 Book Six: 1808 - 10 Book Seven: 1810 - 11 Book Eight: 1811 - 12 Book Nine: 1812 Book Ten: 1812 Book Eleven: 1812 Book Twelve: 1812 Book Thirteen: 1812 Book Fourteen: 1812 Book Fifteen: 1812 - 13 First Epilogue: 1813 - 20 Second Epilogue Reminiscences Reminiscences of Tolstoy, by His Son by Graf Ilia LvovichTolstoi My Visit to Tolstoy by Joseph Krauskopf