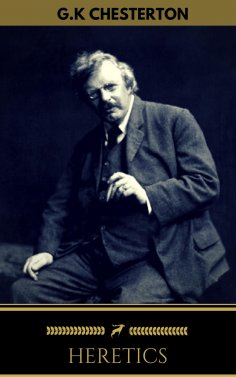 Though he was on the whole a fun loving and gregarious man, during adolescence Chesterton was troubled by thoughts of suicide. In Christianity he found answers to many of the dilemmas and paradoxes of life. Throughout Heretics he provides a very personal critique of contemporary religious notions. His consistently engaging but often wayward humour is mixed liberally with daring flights of fancy and some startling turns of thought. A highly original collection of essays, providing an invaluable contribution to one of the major debates of the last century - one that continues to exercise leading thinkers in the present one. Chapters 01 Introductory Remarks on the Importance of Orthodoxy 02 On the Negative Spirit 03 On Mr. Rudyard Kipling and Making the World Small 04 Mr. Bernard Shaw 05 Mr. H. G. Wells and the Giants 06 Christmas and the Esthetes 07 Omar and the Sacred Vine 08 The Mildness of the Yellow Press 09 The Moods of Mr. George Moore 10 On Sandals and Simplicity 11 Science and the Savages 12 Paganism and Mr. Lowes Dickinson 13 Celts and Celtophiles 14 On Certain Modern Writers and the Institution of the Family 15 On Smart Novelists and the Smart Set 16 On Mr. McCabe and a Divine Frivolity 17 On the Wit of Whistler 18 The Fallacy of the Young Nation 19 Slum Novelists and the Slums 20 Concluding Remarks on the Importance of Orthodoxy