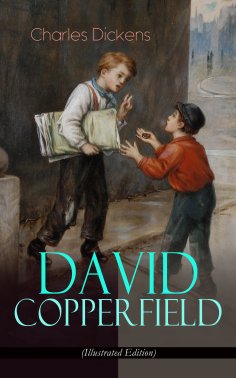 This carefully crafted ebook: "DAVID COPPERFIELD (Illustrated Edition)" is formatted for your eReader with a functional and detailed table of contents.
The story follows the life of David Copperfield, a young boy who is born six months after the death of his father, from childhood to maturity. David spends his early years in relative happiness with his loving mother and their kindly housekeeper, Peggotty, but when his mother remarries David is sent to lodge with Peggotty's family. His mother and her newly born child die, Peggotty marries, and since no one remains to care for David in London, he decides to run away, and he walks from London to Dover, to his only relative, an eccentric yet kind-hearted great-aunt. Many elements of the novel follow events in Dickens' own life, and it is often considered as his veiled autobiography.
Charles Dickens (1812-1870) was an English writer and social critic. He created some of the world's best-known fictional characters and is regarded as the greatest novelist of the Victorian era. His works enjoyed unprecedented popularity during his lifetime, and by the twentieth century critics and scholars had recognized him as a literary genius. His novels and short stories enjoy lasting popularity.