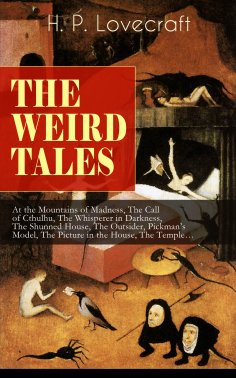 This carefully crafted ebook: "THE WEIRD TALES of H. P. Lovecraft: At the Mountains of Madness, The Call of Cthulhu, The Whisperer in Darkness, The Shunned House, The Outsider, Pickman's Model, The Picture in the House, The Temple…" is formatted for your eReader with a functional and detailed table of contents.
This edition represents a select collection of Lovecrafs's greatest horror & fantasy works. Howard Phillips Lovecraft (1890-1937) was an American author who achieved posthumous fame through his influential works of horror fiction. He is now regarded as one of the most significant 20th-century authors in his genre. Some of Lovecraft's work was inspired by his own nightmares. His interest started from his childhood days when his grandfather stirred his interest in the weird by telling him his own original tales of Gothic horror.
Table of Contents:
Dagon
The Statement of Randolph Carter
The Cats of Ulthar
Celephaïs
From Beyond
The Temple
Nyarlathotep
The Picture in the House
Facts Concerning the Late Arthur Jermyn and His Family
The Quest of Iranon
The Moon-Bog
The Outsider
Herbert West—Reanimator
The Hound
The Rats in the Walls
The Unnamable
The Festival
The Shunned House
The Horror at Red Hook
He
Cool Air
The Call of Cthulhu
Pickman's Model
The Strange High House in the Mist
The Silver Key
The Case of Charles Dexter Ward
The Colour Out of Space
The Dunwich Horror
The Whisperer in Darkness
At the Mountains of Madness
The Shadow over Innsmouth
The Dreams in the Witch House
The Thing on the Doorstep
The Evil Clergyman
The Haunter of the Dark