Celephaïs, Cool Air, Dagon, The Descendant, The Doom That Came to Sarnath, The Evil Clergyman 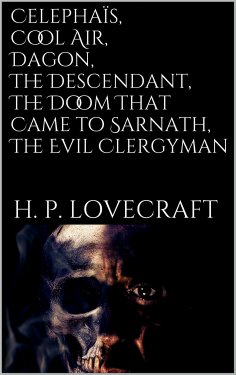 In a dream Kuranes saw the city in the valley, and the sea-coast beyond, and the snowy peak overlooking the sea, and the gaily painted galleys that sail out of the harbour toward the distant regions where the sea meets the sky. In a dream it was also that he came by his name of Kuranes, for when awake he was called by another name. Perhaps it was natural for him to dream a new name; for he was the last of his family, and alone among the indifferent millions of London, so there were not many to speak to him and remind him who he had been. His money and lands were gone, and he did not care for the ways of people about him, but preferred to dream and write of his dreams. What he wrote was laughed at by those to whom he shewed it, so that after a time he kept his writings to himself, and finally ceased to write. The more he withdrew from the world about him, the more wonderful became his dreams; and it would have been quite futile to try to describe them on paper. Kuranes was not modern, and did not think like others who wrote. Whilst they strove to strip from life its embroidered robes of myth, and to shew in naked ugliness the foul thing that is reality, Kuranes sought for beauty alone. When truth and experience failed to reveal it, he sought it in fancy and illusion, and found it on his very doorstep, amid the nebulous memories of childhood tales and dreams.