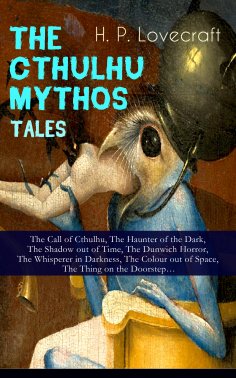 This carefully crafted ebook: "THE CTHULHU MYTHOS TALES – The Call of Cthulhu, The Shadow out of Time, The Dunwich Horror, The Haunter in the Dark, The Whisperer in Darkness, The Colour out of Space, The Thing on the Doorstep…" is formatted for your eReader with a functional and detailed table of contents.
The Cthulhu Mythos represent a gateway between the known universe and an ancient dimension of terror inhabited with unspeakable creatures, a pantheon of alien extra-dimensional deities and horrors which predate humanity, and which are hinted at in eons-old myths and legends. Lovecraft's materialist views led him to espouse his philosophical views through his fiction; these philosophical views came to be called cosmicism. Cosmicism took on a dark tone with his creation of what is today called the Cthulhu Mythos.
Howard Phillips Lovecraft (1890-1937) was an American author who achieved posthumous fame through his influential works of horror fiction. He is now regarded as one of the most significant 20th-century authors in his genre. Some of Lovecraft's work was inspired by his own nightmares. His interest started from his childhood days when his grandfather stirred his interest in the weird by telling him his own original tales of Gothic horror.
Table of Contents:
The Call of Cthulhu
The Haunter of the Dark
Dagon
Nyarlathotep
The Nameless City
Azathoth
The Hound
The Festival
The Colour out of Space
History of the Necronomicon
The Dunwich Horror
The Whisperer in Darkness
At the Mountains of Madness
The Shadow over Innsmouth
The Dreams in the Witch House
The Thing on the Doorstep
The Shadow out of Time