SCIENCE FICTION & FANTASY COLLECTION: At the Mountains of Madness, The Shadow Out of Time, Beyond th 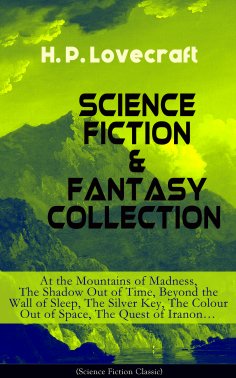 This carefully crafted ebook: "SCIENCE FICTION & FANTASY COLLECTION: At the Mountains of Madness, The Shadow Out of Time, Beyond the Wall of Sleep, The Silver Key, The Colour Out of Space, The Quest of Iranon…" is formatted for your eReader with a functional and detailed table of contents.
"The process of delving into the black abyss is to me the keenest form of fascination." - H. P. Lovecraft
This volume assembles Lovecraft's greatest sci-fi tales and reveals the mystical incredible universe he created.
Howard Phillips Lovecraft (1890-1937) was an American author who achieved posthumous fame through his influential works of horror fiction. He is now regarded as one of the most significant 20th-century authors in his genre. Some of Lovecraft's work was inspired by his own nightmares. His interest started from his childhood days when his grandfather stirred his interest in the weird by telling him his own original tales of Gothic horror.
Table of Contents:
Beyond the Wall of Sleep
The Doom that Came to Sarnath
The Cats of Ulthar
Celephaïs
The Quest of Iranon
The Other Gods
The Silver Key
The Dream-Quest of Unknown Kadath
The Colour Out of Space
At the Mountains of Madness
The Shadow Out of Time