AT THE MOUNTAINS OF MADNESS (The Lost World Classic) 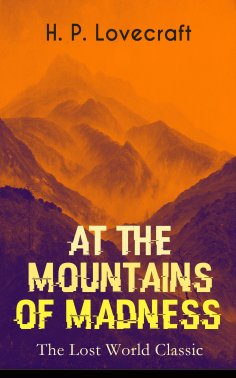 This carefully crafted ebook: "AT AT THE MOUNTAINS OF MADNESS (The Lost World Classic)" is formatted for your eReader with a functional and detailed table of contents.
At the Mountains of Madness is a story, which details the events of a disastrous expedition to the Antarctic continent in September 1930 and what was found there by a group of explorers led by the narrator, Dr. William Dyer of Miskatonic University. Throughout the story, Dyer details a series of previously untold events in the hope of deterring another group of explorers who wish to return to the continent. The title is derived from a line in "The Hashish Man," a short story by fantasy writer Edward Plunkett, Lord Dunsany: "And we came at last to those ivory hills that are named the Mountains of Madness..."
Howard Phillips Lovecraft (1890-1937) was an American author who achieved posthumous fame through his influential works of horror fiction. He is now regarded as one of the most significant 20th-century authors in his genre. Some of Lovecraft's work was inspired by his own nightmares. His interest started from his childhood days when his grandfather would tell him Gothic horror stories.