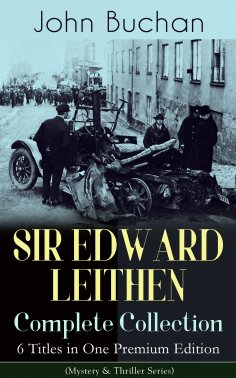 This carefully crafted ebook: "SIR EDWARD LEITHEN Complete Collection – 6 Titles in One Premium Edition (Mystery & Thriller Series)" is formatted for your eReader with a functional and detailed table of contents.
The Power-House - Barrister and Tory MP Edward Leithen must thwart an international anarchist organization plans to destroy Western civilisation, led by Andrew Lumley a rich Englishman.
John Macnab - Leithan and his friends now in their mid-forties decide to turn to poaching. Under the collective name of 'John Macnab' they issue a challenge to their neighbours to prevent them from poaching on their lands undetected...
The Dancing Floor - Leithan and his new friend Milburn find themselves on the Greek island of Plakos where they must save the beautiful Koré Arabin from the superstitious islanders and prevent Milburn's nightmares from coming true.
The Gap in the Curtain - Leithen is introduced at a house party to the brilliant physicist and mathematician professor Moe. Moe has been working on a new theory of time, and believes he has found a way of enabling people to see, as if through a 'gap in the curtain', details of a future event...
Sick Heart River - Leithen is diagnosed with advanced tuberculosis and given a year to live. While deciding how to spend his remaining days, an American associate, John S. Blenkiron, requests help to find his niece's husband, Francis Galliard, who has disappeared from his very successful financial career in New York and fled to Canada.
Sing a Song of Sixpence – Leithan tells a story of a "pretty generous allowance of romance" that cost him sixpence.
John Buchan (1875-1940) was a Scottish novelist and historian and also served as Canada's Governor General. He is now best remembered for his adventure and spy thrillers.