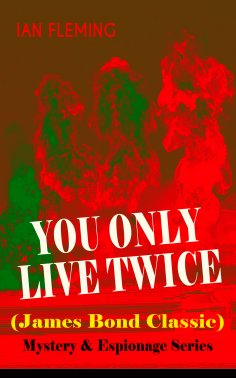 This carefully crafted ebook: "YOU ONLY LIVE TWICE (James Bond Classic) – Mystery & Espionage Series" is formatted for your eReader with a functional and detailed table of contents.
Excerpt:
"Bond took his usual place across the desk from M.'s tall-armed chair. He noticed that there was no file on the expanse of red leather in front of the chair. And the In and Out baskets were both empty. Suddenly he felt really bad about everything – about letting M. down, letting the Service down, letting himself down . . ."
"You Only Live Twice" - After the death of his wife Bond loses his steam as a No. 1 secret agent. Sent on a mission in Japan, Bond comes face to face with his arch nemesis Ernst Stavro Blofeld again...
Ian Fleming (1908–1964) was an English author, journalist and naval intelligence officer who is best known for his James Bond series of spy novels. James Bond is a British Secret Service agent and often referred to by his code name, 007.