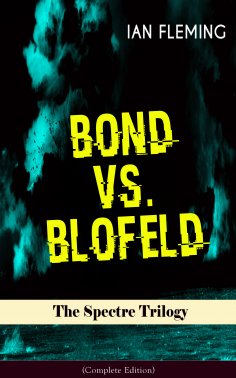 This carefully crafted ebook: "BOND VS. BLOFELD – The Spectre Trilogy (Complete Edition)" is formatted for your eReader with a functional and detailed table of contents.
Ernst Stavro Blofeld is a super villain from the James Bond series of novels and films. An evil genius with aspirations of world domination, he is the archenemy of the British Secret Service agent James Bond. Blofeld is head of the global criminal organisation SPECTRE (Special Executive for Counter-intelligence, Terrorism, Revenge and Extortion) and is commonly referred to as Number 1.
"Thunderball" - The crime syndicate, SPECTRE, headed by Ernst Stavro Blofeld blackmails the Western powers with their stolen atomic bombs. Can Bond deflect Blofeld's evil plans and foil his attempts?
"On Her Majesty's Secret Service" - Blofeld is hiding in Switzerland to complete what he couldn't in "Thunderball". Will Bond's attacks on his centre go unpunished? What will the evil super villian do next?
"You Only Live Twice" - After the death of his wife Bond loses his steam as a No. 1 secret agent. Sent on a mission in Japan, Bond comes face to face with Blofeld again . . .
Ian Fleming (1908–1964) was an English author, journalist and naval intelligence officer who is best known for his James Bond series of spy novels. James Bond is a British Secret Service agent and often referred to by his code name, 007.