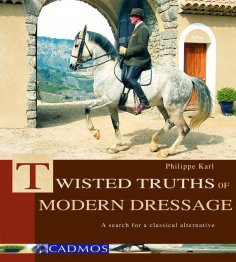 In this book, Philippe Karl, one of the most outspoken critics of the modern dressage world, reveals some disturbing facts about the physical, anatomical and mental effects through official dressage guidelines as issued by the German Horse Society (FN) on horses. By comparing these with philosophies of masters of classical riding such as La Gueriniere and Baucher, he shows possible solutions to the challenging situation of modern competitive dressage.

Philippe Karl, a breeder and rider, is a respected and active participant of all areas of equine sport. For thirteen years, he was an active member of the Cadre Noir, the French elite riding school in Saumur. Philippe Karl lives in Southern France and teaches riding students all over Europe. His previous publications "Hohe Schule der Doppellonge and "Reitkunst have been translated into several languages and achieved international recognition. Phillipe Karl is also a talented artist, whose detailed and often satirical drawings complement this book.