The Echoes of the Jazz Age Collection 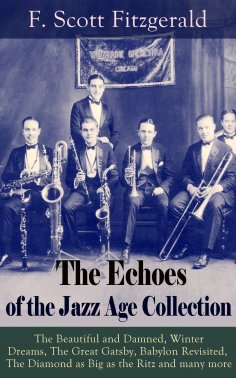 This carefully crafted ebook: "The Echoes of the Jazz Age Collection: The Beautiful and Damned, Winter Dreams, The Great Gatsby, Babylon Revisited, The Diamond as Big as the Ritz and many more" is formatted for your eReader with a functional and detailed table of contents.
Francis Scott Key Fitzgerald (1896-1940) was an American author of novels and short stories, whose works are the paradigmatic writings of the Jazz Age. He is widely regarded as one of the greatest American writers of the 20th century. Fitzgerald is considered a member of the "Lost Generation" of the 1920s.
Excerpt:
"It was an age of miracles, it was an age of art, it was an age of excess, and it was an age of satire.
We were the most powerful nation. Who could tell us any longer what was fashionable and what was fun? Isolated during the European War, we had begun combing the unknown South and West for folkways and pastimes, and there were more ready to hand…"
Table of Contents:
Echoes of the Jazz Age
Tales from the Jazz Age:
My Last Flappers:
The Jelly-bean
The Camel's Back
May Day
Porcelain and Pink
Fantasies:
The Diamond As Big As the Ritz
The Curious Case of Benjamin Button
Tarquin of Cheapside
O Russet Witch!
Unclassified Masterpieces:
The Lees of Happiness
Mr. Icky
Jemina, the Mountain Girl
The Beautiful and Damned
The Great Gatsby
Babylon Revisited
Winter Dreams