The Taming of the Shrew (The Unabridged Play) + The Classic Biography 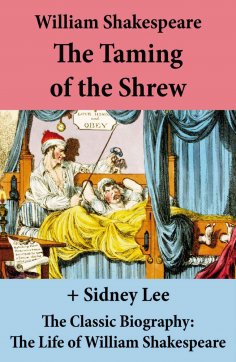 This carefully crafted ebook: "The Taming of the Shrew (The Unabridged Play) + The Classic Biography: The Life of William Shakespeare" is formatted for your eReader with a functional and detailed table of contents. The Taming of the Shrew is one of Shakespeare's earliest comedies, believed to have been written between 1590 and 1592. It was inspired by classical Roman comedy and the Italian commedia dell'arte. Baptista Minola, a rich gentleman of Padua, has two daughters: Katherina, renowned for her sharp tongue, and Bianca, who is sought after by multiple suitors. Baptista decides that Bianca cannot marry until her elder sister finds a husband. Enter Petruchio, who has come to "wive it wealthily in Padua," and who is convinced by Bianca's suitors to woo Katherina. The play ultimately poses the question of who is the bigger shrew: Kate or Petruchio. The subplot involves the subterfuge employed by Lucentio to woo the lovely Bianca. Life of William Shakespeare is a biography of William Shakespeare by the eminent critic Sidney Lee. This book was one of the first major biographies of the Bard of Avon. It was published in 1898, based on the article contributed to the Dictionary of National Biography. William Shakespeare (1564 – 1616) was an English poet and playwright, widely regarded as the greatest writer in the English language and the world's pre-eminent dramatist. He is often called England's national poet and the "Bard of Avon". His extant works, including some collaborations, consist of about 38 plays, 154 sonnets, two long narrative poems, and a few other verses, the authorship of some of which is uncertain. Sir Sidney Lee (1859 – 1926) was an English biographer and critic. He was a lifelong scholar and enthusiast of Shakespeare. His article on Shakespeare in the fifty-first volume of the Dictionary of National Biography formed the basis of his Life of William Shakespeare. This full-length life is often credited as the first modern biography of the poet.