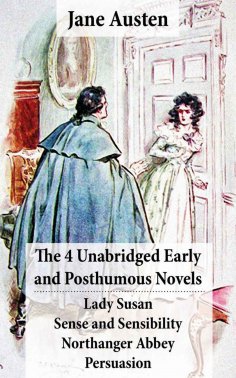 This carefully crafted ebook: "The 4 Unabridged Early and Posthumous Novels: Lady Susan + Sense and Sensibility + Northanger Abbey + Persuasion" is formatted for your eReader with a functional and detailed table of contents. This ebook contains 4 unabridged early and posthumous novels by Jane Austen in one ebook: Lady Susan Sense and Sensibility Northanger Abbey Persuasion Lady Susan is a short epistolary novel, possibly written in 1794, but not published until 1871. Sense and Sensibility was the first of Jane Austen's novels to be published. She began to write it sometime around 1797, and she worked on it for many years before its publication in 1811. The title page said that it was written "By a Lady", and only her immediate family knew that Jane Austen was the author. Impetuous Marianne Dashwood tumbles into a fairytale romance that goes sour, and her practical older sister Elinor copes with the family's financial problems while hiding her own frustrated romantic hopes. Northanger Abbey was written in 1798-99. It is a comic love story set in Bath about a young reader who must learn how to separate fantasy from reality. Miss Austen sold the novel to a publisher in 1803, and the work was advertised but never published. She bought it back many years later, and her brother Henry Austen published the novel as Northanger Abbey after her death in 1817. Persuasion was written in 1815-1816, while Jane Austen was suffering from her fatal illness. She was still working on some revisions at the time of her death in 1817. The novel was published posthumously by her brother, Henry Austen. Persuasion is a novel of second chances, expectations of society, and the constancy of love.