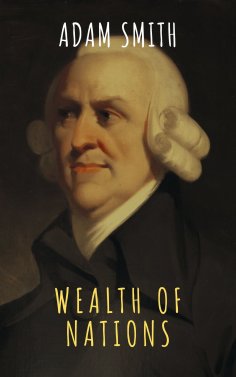 The foundation for all modern economic thought and political economy, "The Wealth of Nations" is the magnum opus of Scottish economist Adam Smith, who introduces the world to the very idea of economics and capitalism in the modern sense of the words. Smith details his argument in the following five books:

Introduction and plan of the work

Part 1 Of the Causes of Improvement in the productive Powers of Labour, and of the Order according to which its Produce is naturally distributed among the different Ranks of the People

Part 2 Of the Nature, Accumulation, and Employment of Stock

Chapter 1 Of the Division of Stock
Chapter 2 Of Money considered as a particular Branch of the general Stock of the Society, or of the Experience of maintaining the National Capital
Chapter 3 Of the Accumulation of Capital, or of productive and unproductive Labour
Chapter 4 Of Stock lent at Interest
Chapter 5 Of the different Employment of Capitals

Part 3 Of the different Progress of Opulence in different Nations

Part 4 Of Systems of political Economy

Chapter 1 Of the Principle of the commercial, or mercantile System
Chapter 2 Of Restraints upon the Importation from foreign Countries of such Goods as can be produced at Home
Chapter 3 Of the extraordinary Restraints upon the Importation of Goods of almost all Kinds, from those Countries with which the Balance is supposed to be disadvantageous
1. Of the Unreasonableness of those Restraints even upon the Principles of the Commercial System
2. Of the Unreasonableness of those extraordinary Restraints upon other Principles
Chapter 4 Of Drawbacks
Chapter 5 Of Bounties
Chapter 6 Of Treaties of Commerce
Chapter 7 Of Colonies
1. Of the Motives for establishing new Colonies
2. Causes of Prosperity of New Colonies
3. Of the Advantages which Europe has derived from the Discovery of America, and from that of a Passage to the East Indies by the Cape of Good Hope
Chapter 8 Conclusion of the Mercantile System
Chapter 9 Of the Agricultural Systems, or of those Systems of Political Economy, which represent the Produce of Land, as either the sole or the principal Source of the Revenue and Wealth of every Country

Part 5 Of the Revenue of the Sovereign or Commonwealth