Records of a Family of Engineers 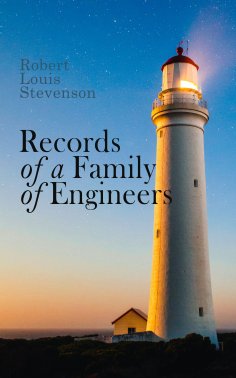 "Records of a Family of Engineers" is a story of the Robert Louis Stevenson's family and their accomplishments in the area of lighthouse engineering, focused on the author's grandfather Robert Stevenson (1772-1850), who was a Scottish civil engineer and famed designer and builder of lighthouses. The author traces the history and the name of the Stevenson family from the thirteenth century onwards, and discusses his ancestors through to Robert Stevenson. In the second and the third chapter, Robert Louis Stevenson thoroughly describes his grandfather's involvement with the Northern Lighthouse Board, where Robert Stevenson served as engineer for nearly fifty years, until 1842, during which time he designed and oversaw the construction and later improvement of numerous lighthouses, including the Bell Rock Lighthouse, which is one of his most famous works.

Robert Louis Stevenson (1850-1894) was a Scottish novelist and travel writer, most noted for his works "Treasure Island", "Kidnapped", "Strange Case of Dr Jekyll and Mr Hyde", and "A Child's Garden of Verses". Born and educated in Edinburgh, Stevenson suffered from serious bronchial trouble for much of his life, but continued to write prolifically and travel widely in defiance of his poor health. A celebrity in his lifetime, Stevenson's critical reputation has fluctuated since his death, but the late 20th century brought a re-evaluation of Stevenson as an artist of great range and insight, a literary theorist, an essayist and social critic, a witness to the colonial history of the Pacific Islands, and a humanist.