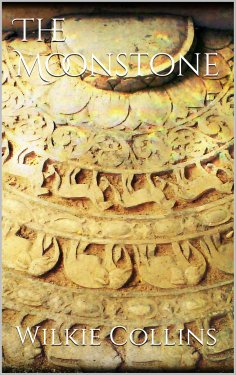 One of the wildest of these stories related to a Yellow Diamond-a famous gem in the native annals of India.
The earliest known traditions describe the stone as having been set in the forehead of the four-handed Indian god who typifies the Moon. Partly from its peculiar colour, partly from a superstition which represented it as feeling the influence of the deity whom it adorned, and growing and lessening in lustre with the waxing and waning of the moon, it first gained the name by which it continues to be known in India to this day-the name of THE MOONSTONE. A similar superstition was once prevalent, as I have heard, in ancient Greece and Rome; not applying, however (as in India), to a diamond devoted to the service of a god, but to a semi-transparent stone of the inferior order of gems, supposed to be affected by the lunar influences-the moon, in this latter case also, giving the name by which the stone is still known to collectors in our own time.
The adventures of the Yellow Diamond begin with the eleventh century of the Christian era.
At that date, the Mohammedan conqueror, Mahmoud of Ghizni, crossed India; seized on the holy city of Somnauth; and stripped of its treasures the famous temple, which had stood for centuries-the shrine of Hindoo pilgrimage, and the wonder of the Eastern world.
Of all the deities worshipped in the temple, the moon-god alone escaped the rapacity of the conquering Mohammedans. Preserved by three Brahmins, the inviolate deity, bearing the Yellow Diamond in its forehead, was removed by night, and was transported to the second of the sacred cities of India-the city of Benares.
Here, in a new shrine-in a hall inlaid with precious stones, under a roof supported by pillars of gold-the moon-god was set up and worshipped. Here, on the night when the shrine was completed, Vishnu the Preserver appeared to the three Brahmins in a dream.
The deity breathed the breath of his divinity on the Diamond in the forehead of the god. And the Brahmins knelt and hid their faces in their robes. The deity commanded that the Moonstone should be watched, from that time forth, by three priests in turn, night and day, to the end of the generations of men. And the Brahmins heard, and bowed before his will. The deity predicted certain disaster to the presumptuous mortal who laid hands on the sacred gem, and to all of his house and name who received it after him. And the Brahmins caused the prophecy to be written over the gates of the shrine in letters of go