Frankenstein or The Modern Prometheus : The 200th Anniversary Edition 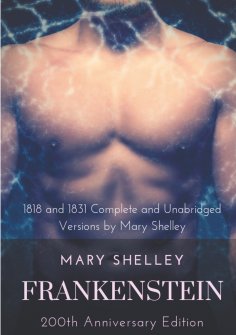 Frankenstein; or, The Modern Prometheus, is a novel written by English author Mary Shelley about eccentric scientist Victor Frankenstein, who creates a grotesque creature in an unorthodox scientific experiment. Shelley started writing the story when she was eighteen, and the novel was published when she was twenty. The first edition was published anonymously in London in 1818. Shelley's name appears on the second edition, published in France in 1823. Shelley had travelled through Europe in 1814, journeying along the river Rhine in Germany with a stop in Gernsheim which is just 17 km (10 mi) away from Frankenstein Castle, where two centuries before an alchemist was engaged in experiments. Later, she traveled in the region of Geneva (Switzerland - where much of the story takes place - and the topics of galvanism and other similar occult ideas were themes of conversation among her companions, particularly her lover and future husband, Percy Shelley. Mary, Percy, Lord Byron, and John Polidori decided to have a competition to see who could write the best horror story. After thinking for days, Shelley dreamt about a scientist who created life and was horrified by what he had made; her dream later evolved into the story within the novel. Frankenstein is infused with elements of the Gothic novel and the Romantic movement and is also considered to be one of the earliest examples of science fiction.
This special limited edition has been released to commemorate the 1818-2018 200th Anniversary of this legendary novel.

Mary Wollstonecraft Shelley (1797 - 1851) was an English novelist, short story writer, dramatist, essayist, biographer, and travel writer, best known for her Gothic novel Frankenstein: or, The Modern Prometheus (1818). She also edited and promoted the works of her husband, the Romantic poet and philosopher Percy Bysshe Shelley. Her father was the political philosopher William Godwin, and her mother was the philosopher and feminist Mary Wollstonecraft. After Wollstonecraft's death less than a month after her daughter Mary was born, Mary was raised by Godwin, who was able to provide his daughter with a rich, if informal, education, encouraging her to adhere to his own liberal political theories. When Mary was four, her father married a neighbour, with whom, as her stepmother, Mary came to have a troubled relationship. In 1814, Mary began a romance with one of her father's political followers, Percy Bysshe Shelley, who was already married. Together with Mary's stepsister Claire Clairmont, Mary and Shelley left for France and travelled through Europe. Upon their children died before Mary Shelley gave birth to her last and only surviving child, Percy Florence Shelley. In 1822, her husband drowned when his sailing boat sank during a storm near Viareggio. A year later, Mary Shelley returned to England and from then on devoted herself to the upbringing of her son and a career as a professional author. The last decade of her life was dogged by illness, probably caused by the brain tumour that was to kill her at the age of 53.return to England, Mary was pregnant with Percy's child. Over the next two years, she and Percy faced ostracism, constant debt, and the death of their prematurely born daughter. They married in late 1816, after the suicide of Percy Shelley's first wife, Harriet. In 1816, the couple famously spent a summer with Lord Byron, John William Polidori, and Claire Clairmont near Geneva, Switzerland, where Mary conceived the idea for her novel Frankenstein.