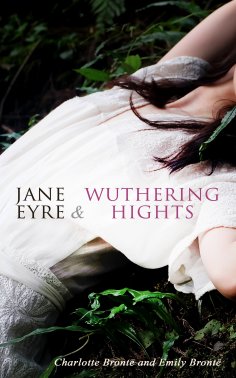 "Jane Eyre" follows the emotions and experiences of its eponymous heroine, including her growth to adulthood and her love for Mr. Rochester, the Byronic master of Thornfield Hall. Jane spent her childhood living with her uncle and aunt at Gateshead Hall, where she was emotionally and physically abused by her aunt and cousins. After finishing school at Lowood Institution for poor and orphaned girls, where she gain friends and role models she starts working as a governess at Thornfield Hall, where she falls in love with her employer, Edward, but their love has a lot of obstacles to beat.
"Wuthering Heights" – In 1801, Lockwood, a wealthy young man from the South of England who is seeking peace and recuperation, rents Thrushcross Grange in Yorkshire. He visits his landlord, Heathcliff, who lives in a remote moorland farmhouse, Wuthering Heights. There Lockwood finds an odd assemblage: Heathcliff who seems to be a gentleman, but his manners are uncouth; the reserved mistress of the house who is in her mid-teens; and a young man who seems to be a member of the family, yet dresses and speaks as if he is a servant. After his visit to the Heights, Lockwood becomes ill, and is confined to his bed for some length of time. The Grange housekeeper, Ellen Dean, who is looking after him, tells him the story of the family at the Heights during his convalescence.

Charlotte and Emily Brontë were sisters from a nineteenth-century literary family associated with the village of Haworth in the West Riding of Yorkshire, England. They are well known as poets and novelists and their stories immediately attracted attention for their passion and originality. Charlotte's Jane Eyre was the first to know success, while Emily's Wuthering Heights was later accepted as masterpiece of literature.