To the Lighthouse & The Waves 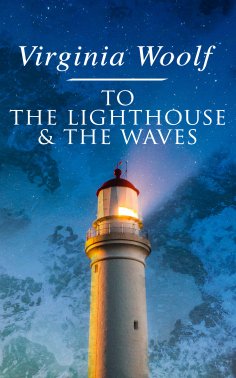 "To the Lighthouse" – The Ramsey family arrives to their summer house in the Hebrides, on the Isle of Sky in Scotland. They plan to visit the island's lighthouse one day, but the weather doesn't allow them and that creates some tension between family members. As the Ramsays have been joined at the house by a number of friends and colleagues, the trip to the lighthouse doesn't happen. Passing of the time brings death and grief to the Ramsey family, but the tension is still there.
"The Waves" consists of soliloquies spoken by six characters: Bernard, Susan, Rhoda, Neville, Jinny, and Louis. Also important is Percival, the seventh character, though we never hear him speak in his own voice. The soliloquies that span the characters' lives are broken up by nine brief third-person interludes detailing a coastal scene at varying stages in a day from sunrise to sunset. As the six characters or "voices" speak Woolf explores concepts of individuality, self and community. Each character is distinct, yet together they compose a gestalt about a silent central consciousness.

Virginia Woolf (1882-1941) was an English writer and one of the foremost modernists of the twentieth century. Woolf was a significant figure in London literary society and a central figure in the influential Bloomsbury Group of intellectuals. Her most famous works include the novels Mrs. Dalloway and To the Lighthouse, and the book-length essay A Room of One's Own.