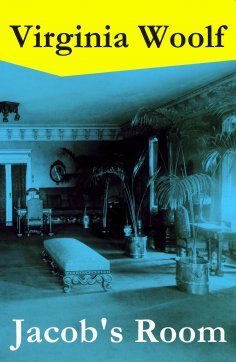 This carefully crafted ebook: "Jacob's Room (The Original 1922 Hogarth Press Edition)" is formatted for your eReader with a functional and detailed table of contents. The novel centres, in a very ambiguous way, around the life story of the protagonist Jacob Flanders, and is presented entirely by the impressions other characters have of Jacob (except for those times when we do indeed get Jacob's perspective). Thus, although it could be said that the book is primarily a character study and has little in the way of plot or background, the narrative is constructed as a void in place of the central character, if indeed the novel can be said to have a 'protagonist' in conventional terms. Adeline Virginia Woolf (25 January 1882 – 28 March 1941) was an English writer, and one of the foremost modernists of the twentieth century. During the interwar period, Woolf was a significant figure in London literary society and a central figure in the influential Bloomsbury Group of intellectuals. Her most famous works include the novels Mrs Dalloway (1925), To the Lighthouse (1927) and Orlando (1928), and the book-length essay A Room of One's Own (1929), with its famous dictum, "A woman must have money and a room of her own if she is to write fiction."