TAPS AT REVEILLE - 18 Tales in One Edition 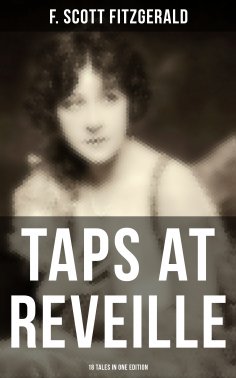 Taps at Reveille is a collection of 18 short stories by F. Scott Fitzgerald, published in 1935 and dedicated to Fitzgerald's agent Harold Ober. It was the fourth and final collection of short stories Fitzgerald published in his lifetime. The eighteen stories collected in Taps at Reveille are: "The Scandal Detectives" "The Freshest Boy" "He Thinks He's Wonderful" "The Captured Shadow" "The Perfect Life" "First Blood" "A Nice Quiet Place" "A Woman with a Past" "Crazy Sunday" "Two Wrongs" "The Night of Chancellorsville" "The Last of the Belles" "Majesty" "Family in the Wind" "A Short Trip Home" "One Interne" "The Fiend" "Babylon Revisited"
Francis Scott Key Fitzgerald (1896 – 1940) was an American author of novels and short stories, whose works are the paradigmatic writings of the Jazz Age, a term he coined. He is widely regarded as one of the greatest American writers of the 20th century.