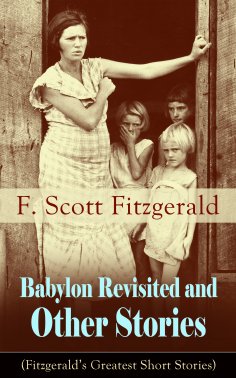 This carefully crafted ebook: "Babylon Revisited and Other Stories (Fitzgerald's Greatest Short Stories)" is formatted for your eReader with a functional and detailed table of contents.
Babylon Revisited and Other Stories is a collection of Fitzgerald's ten best-known short stories written between 1920 and 1937. The Stories are set in the year after the stock market crash of 1929, just after what Fitzgerald called the "Jazz Age". Brief flashbacks take place in the Jazz age itself. Also it shows several references to the depression, and how the character had to adapt his life to it. Much of it is based on the author's own experiences. The story Babylon Revisited is based on a true incident regarding Fitzgerald, his daughter "Scottie", his sister-in-law Rosalind and her husband Newman Smith, on whom Marion and Lincoln Peters are based. Rosalind and Newman had not been able financially to live as well as Scott and Zelda had lived during the 1920s, and they had always regarded Scott as an irresponsible drunkard whose obsession with high living was responsible for Zelda's mental problems. When Zelda suffered a breakdown and was committed to a sanitarium in Switzerland, Rosalind felt that Scott was unfit to raise their daughter and that Rosalind and Newman should adopt her.
Francis Scott Key Fitzgerald (1896 -1940) was an American author of novels and short stories, whose works are the paradigmatic writings of the Jazz Age. He is widely regarded as one of the greatest American writers of the 20th century. Fitzgerald is considered a member of the "Lost Generation" of the 1920s.
Table of Contents:
The Ice Palace
May Day
The Diamond as Big as the Ritz
Winter Dreams
Absolution
The Rich Boy
The Freshest Boy
Babylon Revisited
Crazy Sunday
The Long Way Out