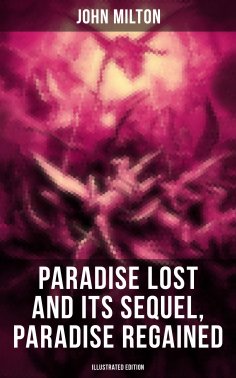 "Paradise Lost" is an epic poem in blank verse by the 17th-century English poet John Milton. It was originally published in 1667 in ten books, with a total of over ten thousand individual lines of verse. It is considered by critics to be Milton's "major work", and the work helped to solidify his reputation as one of the greatest English poets of his time. The poem concerns the Biblical story of the Fall of Man: the temptation of Adam and Eve by the fallen angel Satan and their expulsion from the Garden of Eden. Milton's purpose, stated in Book I, is to "justify the ways of God to men".
"Paradise Regained" is a poem by Milton, published in 1671. It is connected by name to his earlier and more famous epic poem "Paradise Lost," with which it shares similar theological themes. It deals with the subject of the temptation of Christ.
John Milton (1608 – 1674) was an English poet, polemicist, a scholarly man of letters, and a civil servant for the Commonwealth of England under Oliver Cromwell. Milton's poetry and prose reflect deep personal convictions, a passion for freedom and self-determination, and the urgent issues and political turbulence of his day.