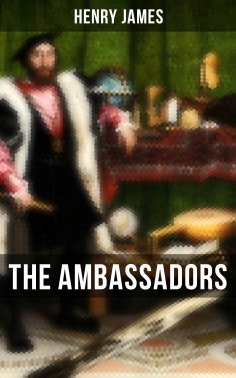 The Ambassadors is a novel by Henry James. This dark comedy, seen as one of the masterpieces of James's final period, follows the trip of protagonist Lewis Lambert Strether to Europe in pursuit of Chad Newsome, his widowed fiancée's supposedly wayward son; he is to bring the young man back to the family business, but he encounters unexpected complications. The third-person narrative is told exclusively from Strether's point of view. The theme of liberation from a cramped, almost starved, emotional life into a more generous and gracious existence plays throughout The Ambassadors, yet it is noteworthy that James does not naïvely make of Paris a faultless paradise for culturally stunted Americans. Strether learns about the reverse of the European coin when he sees how desperately Marie fears losing Chad, after all she has done for him. As one critic proposed, Strether does not shed his American straitjacket only to be fitted with a more elegant European model, but instead learns to evaluate every situation on its merits, without prejudices. The final lesson of Strether's European experience is to distrust preconceived notions and perceptions from anyone and anywhere, but to rely upon his own observation and judgment.
Henry James (1843–1916) was an American-British writer who spent most of his writing career in Britain. He is regarded as one of the key figures of 19th-century literary realism.