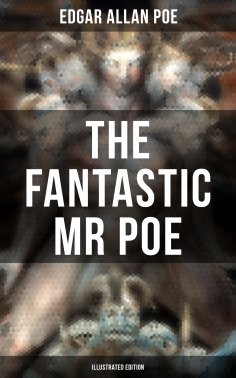 This carefully edited collection has been designed and formatted to the highest digital standards and adjusted for readability on all devices.
Poe was a prolific writer of science fiction and supernatural tales, responding in his writing to numerous emerging technologies. He often included elements of popular pseudo-sciences, dealing with themes such as time travel and resurrection of the dead.
Table of Contents:
Ms. Found in a Bottle
The Facts in the Case of M. Valdemar
A Descent into the Maelstrom
The Balloon-Hoax
Mesmeric Revelation
The Thousand-and-Second Tale of Scheherazade
Some Words with a Mummy
A Tale of the Ragged Mountains
The Power of Words
Mellonta Tauta
Mystification
The Premature Burial
The Oblong Box
The Spectacles
The System of Dr. Tarr and Prof. Fether
The Sphinx
Von Kempelen and His Discovery
The Conversation of Eiros and Charmion
The Colloquy of Monos and Una
Edgar Allan Poe (1809-1849) was an American writer, editor, and literary critic, best known for his poetry and short stories of mystery and the macabre. He is widely regarded as a central figure of Romanticism in the United States and American literature as a whole, and he was one of the country's earliest practitioners of the short story.