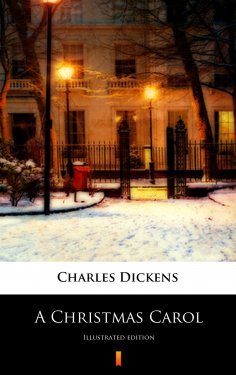 A Christmas Carol in Prose, Being a Ghost Story of Christmas, commonly known as A Christmas Carol, is one of the most legendary stories by Charles Dickens. This edition contains the original 1843 illustrations by celebrated caricaturist John Leech. The story has long since become one of the most beloved stories in the English language. As much a part of the holiday season as holly, mistletoe, and evergreen wreaths, this perennial favourite continues to delight new readers and rekindle thoughts of charity and goodwill.
The tale begins on a cold and bleak Christmas Eve in London, exactly seven years after the death of Ebenezer Scrooge’s business partner, Jacob Marley. Scrooge, an old miser, hates Christmas. He refuses his nephew Fred’s Christmas dinner invitation.
At home that night, Scrooge is visited by Marley’s ghost, who is forever cursed to wander the earth dragging a network of heavy chains, forged during a lifetime of greed and selfishness. Marley tells Scrooge that he has one chance to avoid the same fate–he will be visited by three spirits, one on each successive evening, and he must listen to them or be cursed to carry chains of his own, much longer than Marley’s chains.