The Complete Novels: The Portrait of a Lady + The Wings of the Dove + What Maisie Knew + The America 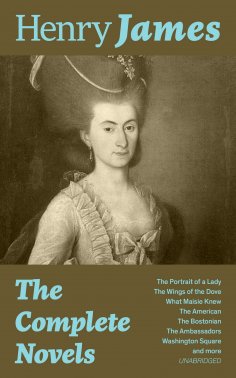 This carefully crafted ebook: "The Complete Novels: The Portrait of a Lady + The Wings of the Dove + What Maisie Knew + The American + The Bostonian + The Ambassadors + Washington Square and more (Unabridged)” is formatted for your eReader with a functional and detailed table of contents. Table of Contents: Confidence Roderick Hudson The Ambassadors The American The Awkward Age The Bostonians The Europeans The Golden Bowl The Other House The Outcry The Portrait of a Lady The Princess Casamassima The Reverberator The Sacred Fount The Spoils of Poynton The Tragic Muse The Whole Family The Wings of the Dove Washington Square Watch and Ward What Maisie Knew The Ivory Tower (Unfinished) The Sense of the Past (Unfinished) The Portrait of a Lady is one of James's most popular long novels, and is regarded by critics as one of his finest. The Portrait of a Lady is the story of a spirited young American woman, Isabel Archer, who in "affronting her destiny", finds it overwhelming. She inherits a large amount of money and subsequently becomes the victim of Machiavellian scheming by two American expatriates. "The Wings of the Dove” tells the story of Milly Theale, an American heiress stricken with a serious disease, and her effect on the people around her. Some of these people befriend Milly with honorable motives, while others are more self-interested. "The American” is an uneasy combination of social comedy and melodrama concerning the adventures and misadventures of Christopher Newman, an essentially good-hearted but rather gauche American businessman on his first tour of Europe. Henry James (1843–1916) was an American-British writer who spent most of his writing career in Britain. He is regarded as one of the key figures of 19th-century literary realism.