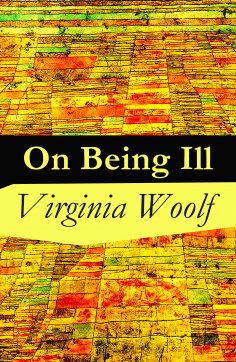 This carefully crafted ebook: "On Being Ill" is formatted for your eReader with a functional and detailed table of contents. The essay seeks to establish illness as a serious subject of literature along the lines of love, jealousy and battle. Woolf writes, "Considering how common illness is, how tremendous the spiritual change that it brings, how astonishing, when the lights of health go down, the undiscovered countries that are then disclosed, what wastes and deserts of the soul a slight attack of influenza brings to light...it becomes strange indeed that illness has not taken its place with love, battle, and jealousy among the prime themes of literature." Adeline Virginia Woolf (25 January 1882 – 28 March 1941) was an English writer, and one of the foremost modernists of the twentieth century. During the interwar period, Woolf was a significant figure in London literary society and a central figure in the influential Bloomsbury Group of intellectuals. Her most famous works include the novels Mrs Dalloway (1925), To the Lighthouse (1927) and Orlando (1928), and the book-length essay A Room of One's Own (1929), with its famous dictum, "A woman must have money and a room of her own if she is to write fiction."