THE DREAMLANDS SERIES: 20+ Gruesome Tales of Terror in One Premium Edition 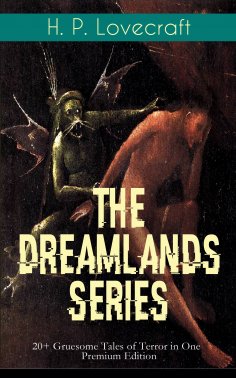 This carefully crafted ebook: "THE DREAMLANDS SERIES: 20+ Gruesome Tales of Terror in One Premium Edition" is formatted for your eReader with a functional and detailed table of contents.
This collection represents "The Dream Cycle" - Lovecraft's famous series of short stories & novellas. They concern themselves with "The Dreamlands," a vast, alternate dimension that can be entered via dreams. Evidently all dreamers see the Dreamlands slightly differently, as Atal, High Priest of Ulthar, mentions that everyone has their own dreamland. In the same sentence he says the Dreamlands that many know is a "general land of vision." The Dreamlands are divided into four regions: The West contains the Steps of Deeper Slumber (descended via the "Cavern of Flame") and the Enchanted Woods by which many enter the Dreamlands. Other points of interest include the port of Dylath-Leen, one of the Dreamlands' largest cities; the town of Ulthar "where no man may kill a cat," the coastal jungle city of Hlanith, and the desert trading capital Illarnek. Here lies the fabled Land of Mnar, whose gray stones are etched with signs and where rise the ruins of the great Sarnath. The South, home of the isle of Oriab and the areas known as the Fantastic Realms. The East, home of Celephaïs, a city dreamt into being by its monarch Kuranes, greatest of all recorded dreamers, and the dangerous Forbidden Lands. The North, location of the feared Plateau of Leng, home of man-eating spiders and the satyr-like "Men of Leng".
Table of Contents:
The Dreams in the Witch House
Polaris
Beyond the Wall of Sleep
The White Ship
The Doom that Came to Sarnath
The Statement of Randolph Carter
The Cats of Ulthar
Celephaïs
From Beyond
Nyarlathotep
The Nameless City
The Quest of Iranon
Ex Oblivione
The Other Gods
The Outsider
Hypnos
What the Moon Brings
Azathoth
The Hound
Pickman's Model
The Strange House in the Mist
The Silver Key
The Dream-Quest of Unknown Kadath
The Case of Charles Dexter Ward
...