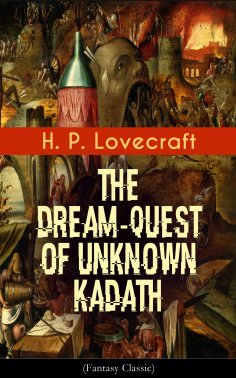 This carefully crafted ebook: "The Dream-Quest of Unknown Kadath (Fantasy Classic)" is formatted for your eReader with a functional and detailed table of contents.
The Dream-Quest of Unknown Kadath belongs to Lovecraft's famous Dream Cycle. The protagonist Randolph Carter dreams three times of a majestic sunset city, but each time he is abruptly snatched away before he can see it up close. When he prays to the gods of dream to reveal the whereabouts of the phantasmal city, they do not answer, and his dreams of the city stop altogether. Undaunted, Carter resolves to go to Kadath, where the gods live, to beseech them in person. However, no one has ever been to Kadath and none even knows how to get there. In dream, Randolph Carter descends "seventy steps" and speaks of his plan to the priests Nasht and Kaman-Thah, whose temple - the Cavern of Flame - borders the Dreamlands. The priests warn Carter of the great danger of his quest and suggest that the gods withdrew his vision of the city on purpose.
Howard Phillips Lovecraft (1890-1937) was an American author who achieved posthumous fame through his influential works of horror fiction. He is now regarded as one of the most significant 20th-century authors in his genre. Some of Lovecraft's work was inspired by his own nightmares. His interest started from his childhood days when his grandfather would tell him Gothic horror stories.