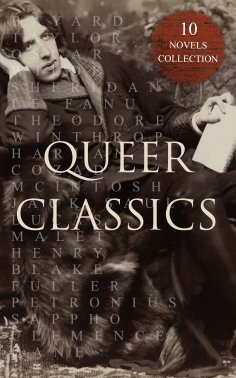 e-artnow presents the classics of queer literature by the most authentic and controversial authors of the past:
Orlando by Virginia Woolf
The Picture of Dorian Gray by Oscar Wilde
Cecil Dreeme by Theodore Winthrop
Well of Loneliness by Radclyffe Hall
Carmilla by Sheridan Le Fanu
Joseph and His Friend by Bayard Taylor
This Finer Shadow by Harlan Cozad McIntosh
Bertram Cope's Year by Henry Blake Fuller
The Sins of the Cities of the Plain by Jack Saul
The Green Carnation by Robert Hichens
The History of Sir Richard Calmady by Lucas Malet

Virginia Woolf (1882–1941) was an English writer, considered one of the most important modernist 20th-century authors and a pioneer in the use of stream of consciousness as a narrative device.
Oscar Wilde (1854–1900) was an Irish poet and playwright. After writing in different forms throughout the 1880s, the early 1890s saw him become one of the most popular playwrights in London. He is best remembered for his epigrams and plays, his novel The Picture of Dorian Gray, and the circumstances of his criminal conviction for gross indecency for consensual homosexual acts in "one of the first celebrity trials", imprisonment, and early death from meningitis at age 46.
Theodore Winthrop (1828–1861) was a writer, lawyer, and world traveller. He was one of the first Union officers killed in the American Civil War.
Radclyffe Hall (1880–1943) was an English poet and author, best known for the novel The Well of Loneliness, a groundbreaking work in lesbian literature. In adulthood, Hall often went by the name John, rather than Marguerite.
Sheridan Le Fanu (1814–1873) was an Irish writer of Gothic tales, mystery novels, and horror fiction. He was a leading ghost story writer of his time, central to the development of the genre in the Victorian era.
Jack Saul (1857-1904) was a notorious male prostitute in Ireland who was involved in various controversies.
Henry Blake Fuller (1857–1929) was a United States novelist and short story writer. He was perhaps the earliest established American author to explore homosexuality in fiction.
Bayard Taylor (1825-1878) was the author of first American gay novel.