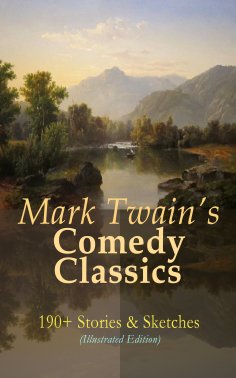 This grand collection of Mark Twain's short stories contains his famous humorous tales, children's stories, satires, and other sketches written in his recognizable witty style:
The Celebrated Jumping Frog of Calaveras County, and Other Sketches
The Celebrated Jumping Frog of Calaveras County
Aurelia's Unfortunate Young Man
A Complaint about Correspondents, Dated in San Francisco
Answers to Correspondents
Among the Fenians
The Story of the Bad Little Boy Who Didn't Come to Grief
Curing a Cold
An Inquiry about Insurances
Literature in the Dry Diggings
'After' Jenkins
Lucretia Smith's Soldier
The Killing of Julius Caesar 'Localized'
An Item which the Editor Himself could not Understand
Among the Spirits
Brief Biographical Sketch of George Washington
A Touching Story of George Washington's Boyhood
A Page from a Californian Almanac
Information for the Million
The Launch of the Steamer Capital
Origin of Illustrious Men
Advice for Good Little Girls
Concerning Chambermaids
Remarkable Instances of Presence of Mind
Honored as a Curiosity in Honolulu
The Steed 'Oahu'
A Strange Dream
Short and Singular Rations
Mark Twain's Burlesque Autobiography and First Romance
Burlesque Autobiography
Awful, Terrible Medieval Romance
Merry Tales
The Private History of a Campaign That Failed
The Invalid's Story
Luck
The Captain's Story
A Curious Experience
Mrs. Mc Williams and the Lightning
Meisterschaft
The £1,000,000 Bank Note and Other New Stories
The Million Pound Bank Note
Mental Telegraphy
The Enemy Conquered
About all Kinds of Ships
Playing Courier
The German Chicago
A Petition to the Queen of England
A Majestic Literary Fossil
Sketches New and Old
The $30,000 Bequest and Other Stories
The Curious Republic of Gondour and Other Whimsical Sketches
Alonzo Fitz, and Other Stories
Mark Twain's Library of Humor
Other Stories
Biography
Samuel Langhorne Clemens (1835-1910), better known by his pen name Mark Twain, was an American writer, humorist, entrepreneur, publisher, and lecturer.