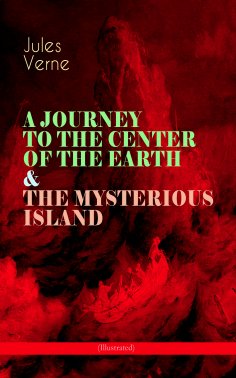 This carefully crafted ebook: "A JOURNEY TO THE CENTER OF THE EARTH & THE MYSTERIOUS ISLAND (Illustrated)" is formatted for your eReader with a functional and detailed table of contents.
Excerpt:
"On the 24th of May, 1863, my uncle, Professor Liedenbrock, rushed into his little house, No. 19 Königstrasse, one of the oldest streets in the oldest portion of the city of Hamburg . . ."
"A Journey to the Center of the Earth" is an 1864 science fiction novel by Jules Verne. The story involves German professor Otto Lidenbrock who believes there are volcanic tubes going toward the centre of the Earth. He, his nephew Axel, and their guide Hans descend into the Icelandic volcano Snæfellsjökull, encountering many adventures, including prehistoric animals and natural hazards, before eventually coming to the surface again in southern Italy, at the Stromboli volcano. In this edition we include both the translations – the first known by the publisher Griffith & Farran (1871) and second by F. A. Malleson (1877). The Malleson translation is widely regarded as the best translation of this Jules Verne classic and is also the most faithful to the original French masterpiece.
Jules Verne (1828-1905) was a French novelist who pioneered the genre of science fiction. A true visionary with an extraordinary talent for writing adventure stories, his writings incorporated the latest scientific knowledge of his day and envisioned technological developments that were years ahead of their time.