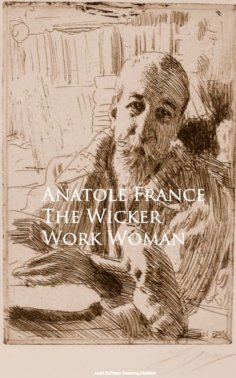 This study M. Bergeret, professor of literature at the University, was preparing his lesson on the eighth book of the Æneid to the shrill mechanical accompaniment of the piano, on which, close by, his daughters were practising a difficult exercise. M. Bergeret's room possessed only one window, but this was a large one, and filled up one whole side. It admitted, however, more draught than light, for the sashes were ill-fitting and the panes darkened by a high contiguous wall. M. Bergeret's table, pushed close against this window, caught the dismal rays of niggard daylight that filtered through. As a matter of fact this study, where the professor polished and repolished his fine, scholarly phrases, was nothing more than a shapeless cranny, or rather a double recess, behind the framework of the main staircase which, spreading out most inconsiderately in a great curve towards the window, left only room on either side for two useless, churlish corners. Trammelled by this monstrous, green-papered paunch of masonry, M. Bergeret had with difficulty discovered in his cantankerous study—a geometrical abortion as well as an æsthetic abomination—a scanty flat surface where he could stack his books along the deal shelves, upon which yellow rows of Teubner classics were plunged in never-lifted gloom. M. Bergeret himself used to sit squeezed close up against the window, writing in a cold, chilly style that owed much to the bleakness of the atmosphere in which he worked. Whenever he found his papers neither torn nor topsy-turvy and his pens not gaping cross-nibbed, he considered himself a lucky man! For such was the usual result of a visit to the study from Madame Bergeret or her daughters, where they came to write up the laundry list or the household accounts. Here, too, stood the dressmaker's dummy, on which Madame Bergeret used to drape the skirts she cut out at home.