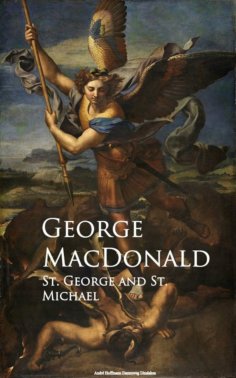 It was the middle of autumn, and had rained all day. Through the lozenge-panes of the wide oriel window the world appeared in the slowly gathering dusk not a little dismal. The drops that clung trickling to the dim glass added rain and gloom to the landscape beyond, whither the eye passed, as if vaguely seeking that help in the distance, which the dripping hollyhocks and sodden sunflowers bordering the little lawn, or the honeysuckle covering the wide porch, from which the slow rain dropped ceaselessly upon the pebble-paving below, could not give—steepy slopes, hedge-divided into small fields, some green and dotted with red cattle, others crowded with shocks of bedraggled and drooping corn, which looked suffering and patient.

The room to which the window having this prospect belonged was large and low, with a dark floor of uncarpeted oak. It opened immediately upon the porch, and although a good fire of logs blazed on the hearth, was chilly to the sense of the old man, who, with his feet on the skin of a fallow-deer, sat gazing sadly into the flames, which shone rosy through the thin hands spread out before them. At the opposite corner of the great low-arched chimney sat a lady past the prime of life, but still beautiful, though the beauty was all but merged in the loveliness that rises from the heart to the face of such as have taken the greatest step in life—that is, as the old proverb says, the step out of doors. She was plainly yet rather richly dressed, in garments of an old-fashioned and well-preserved look. Her hair was cut short above her forehead, and frizzed out in bunches of little curls on each side. On her head was a covering of dark stuff, like a nun's veil, which fell behind and on her shoulders. Close round her neck was a string of amber beads, that gave a soft harmonious light to her complexion. Her dark eyes looked as if they found repose there, so quietly did they rest on the face of the old man, who was plainly a clergyman.